At Intersolar 2022, BYD presented its new MAX LITE commercial storage system and set an example for the energy transition by doing so. Especially in the commercial segment, the investments in renewable energies are enormous to operate as CO2 neutral as possible. As one of the world's largest producers of battery cells, BYD is therefore both a signaller and a pioneer in the photovoltaic industry when it comes to energy storage.

An impressive 250,000 PV storage systems have been delivered to Europe since the product launch of the first Battery Box in 2015. In addition, BYD, in combination with the leading inverter manufacturers, again achieved top rankings in the 2022 Electricity Storage Inspection and was one of the test winners. Read more about Krannich's inverter and storage set in this issue of PV Talk: go to video.

To meet the increasing demand, BYD also announced a new high-voltage system at Intersolar - the BYD HVC (HV Compact). As already mentioned, BYD is one of the largest and most important suppliers of battery systems and, according to official figures, plans to deliver just as many PV storage systems in 2022 as it has since 2015. In other words, they want to double the number of delivered and installed systems within one year.

How can BYD do this? As a globally operating company with around 220,000 employees, BYD designed its strategy early on to cover the entire value chain and thus owns, among other things, its own mines for the extraction of the so important and critical raw materials. More details about the company itself can be found here in the interview with Florian Blaser from Krannich partner EFT Systems: go to video.

The mentioned HVC with the proven blade batteries (LFP cells) will have battery modules that are just as wide but less high than we know from HVS and HVM. This means that 5 modules of the new storage unit (HVC 13.1) are about as high as 4 of the other two high-voltage systems (HVS 10.2 or HVM 11.0) and each module is also a little lighter due to its smaller size. This makes the storage system very attractive in times of increasing energy demand and private households that want to be supplied by their photovoltaic system independently of the grid in the event of a power failure. BYD also offers the option of upgrading the HVC at a later date, for example, if the power demand is significantly increased by the purchase of an electric car two years after the installation of the storage unit. 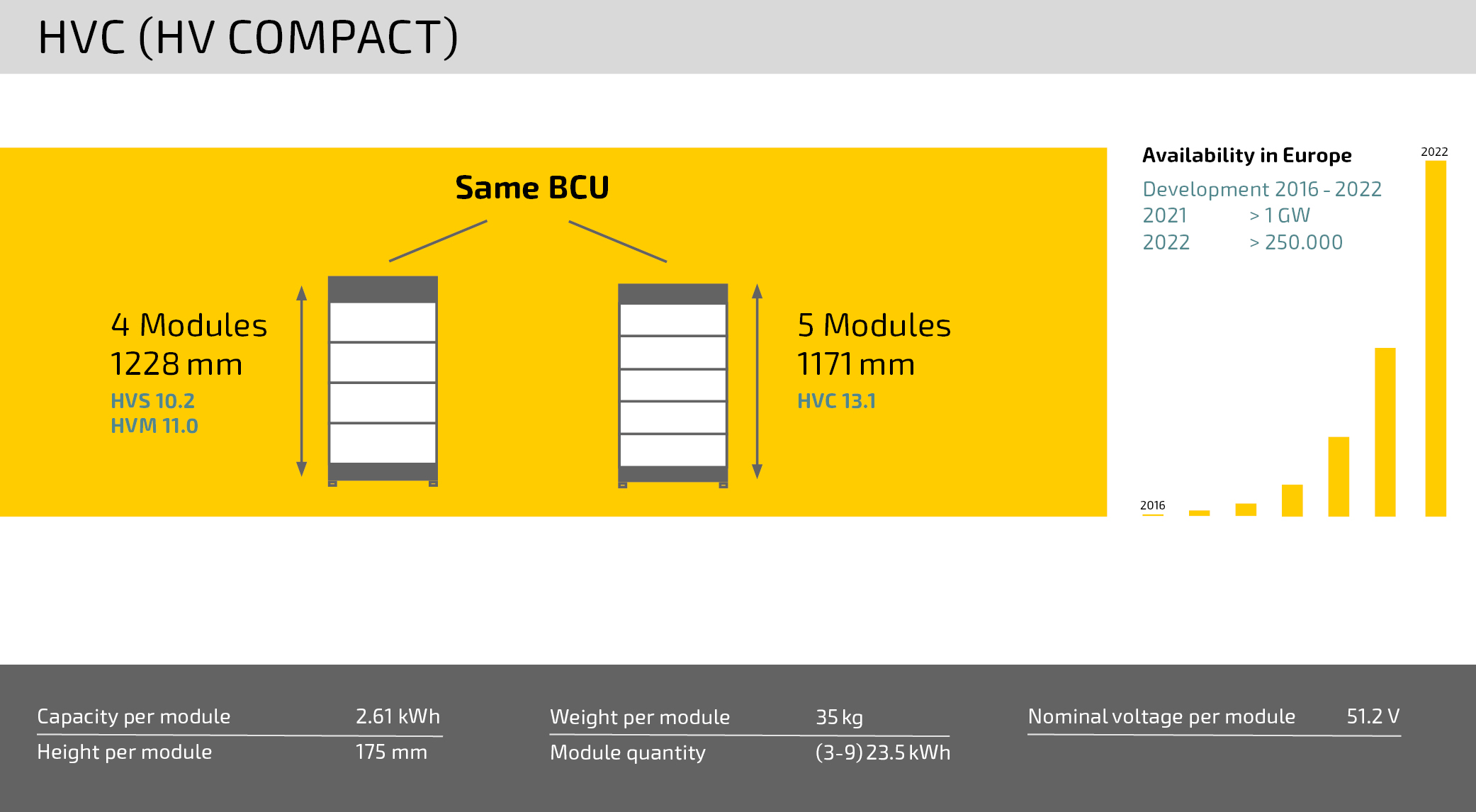 For all those considering a retrofit, a little information. There is no time limit for this offer. Currently, corresponding modules for the first units installed in 2015 are on the market after 7 years and although the initial systems themselves are no longer sold at all, they are still available. It can be assumed that BYD is aiming for the availability of the retrofit modules at least for the 10-year warranty. How long retrofits are worthwhile in terms of price and performance of the storage units must be considered individually for each system. The market and the technology are developing rapidly. So we can expect to see more powerful storage systems with better price/performance on the market in the next few years, and then it may be worthwhile to buy a new one after five years. At the moment, however, this is still dreams of the future.

It is currently not known whether there will also be a new product from BYD in the low-voltage sector. We hope that the new HV and the relief of the market here will also ease the market for LVS somewhat. Demand remains high and we are very grateful to our partners BYD and EFT Systems for the good cooperation, which ensures that we still have constant availability in view of the worldwide situation. Long waiting times for BYD's top products will nevertheless be unavoidable for the time being.