What you didn't know about us until now - part 2

Krannich Solar may be rooted in Germany, but as a photovoltaic wholesaler we operate internationally. Our international orientation contributes significantly to Krannich's worldwide success. Therefore, we would like to give you the opportunity to take a look behind the scenes of some of our branches and get some fun insights.

From the northern center of Austria, the branch office in Wels actively supports customers throughout Austria and South Tyrol.

Since the opening of the branch office in 2012, the team, which is now ten men/women strong, has grown continuously. 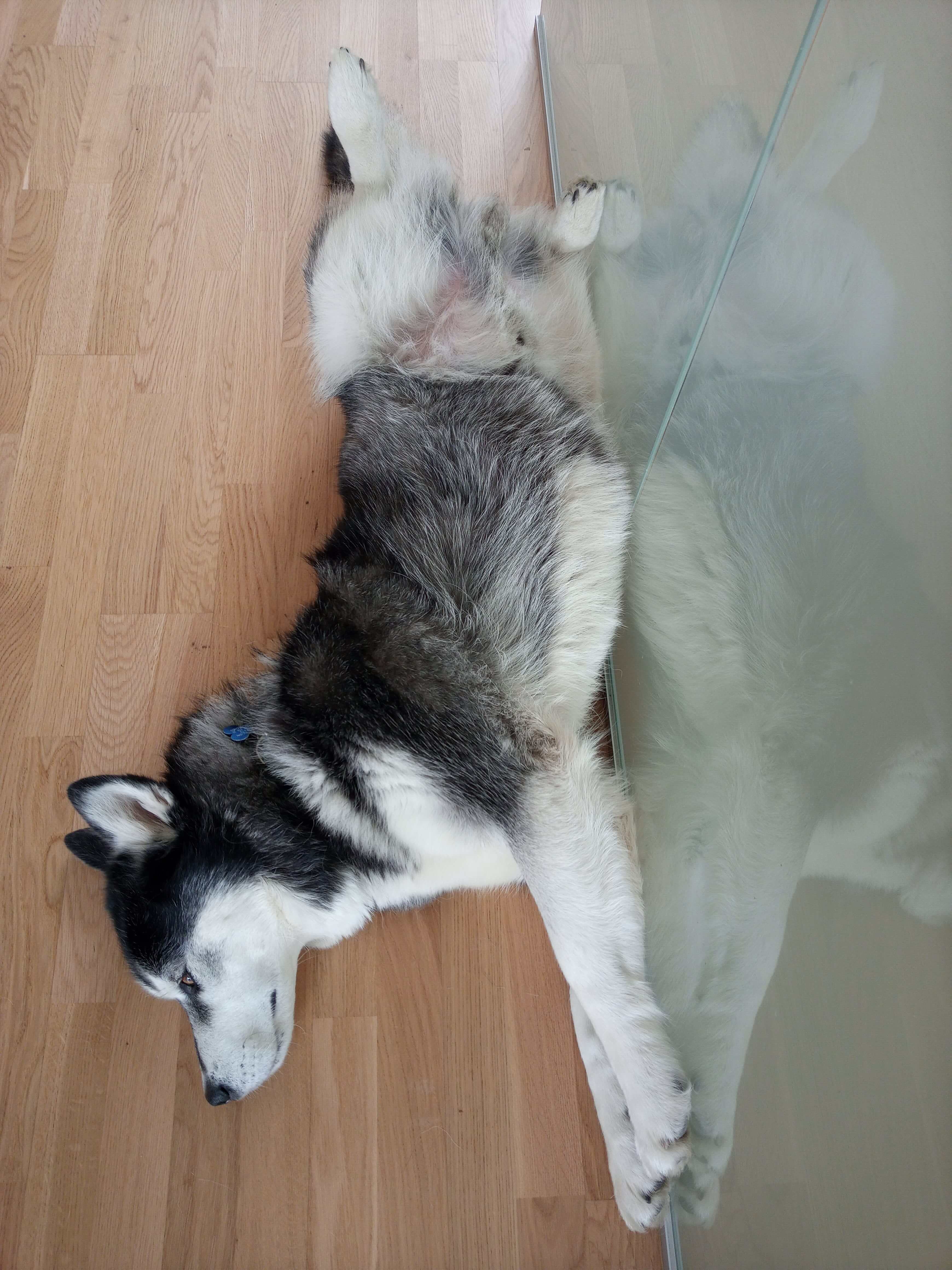 Wels is not only an ideal location because of its good transport links, it is also the venue for the most important Austrian trade fair in the solar industry ("Webuild - Energiesparmesse Wels") and that with tradition - the origins of Messe Wels date back to the 14th century. The photovoltaic industry has not existed for that long, but photovoltaic technology has been enjoying growing installation figures in Austria since 2008.

Of course, the Austrian market also has its own special features: due to its location, snow-resistant products are particularly in demand.

The team is proud, among other things, of its most famous animal employee: Gonzo. For 3 years now the sleepy watchdog has been making sure that everything is in order in the office.

The Krannich Asia branch is one of the newest members of the Krannich family. Based in Singapore and looking after the whole South East Asian region, they started operations in January 2020 - aligned with the rise of Covid-19.

Prasanna, Branch Manager of Krannich Singapore, had a few sleepless nights wondering what was going to happen to the newly recruited team, including himself. In the end, the thoughts were unfounded. And eventually, as Prasanna and his team were starting from a clean slate, they successfully built a business 100% remote: Zoom calls, WhatsApp, Facebook and scanned documents are their main tools. Shaking hands and having coffee are not part yet of their sales tools. Building that trust without any physical interaction was the biggest challenge they had to face.

Krannich Singapore is now mastering the lovely world of logistics to ship items all around the region and using banking tools to secure all transactions. And still giving customer the feeling, they are sitting next to them: efficient, safe and quick. If they don’t have an item in stock in Singapore, they can still rely on their colleagues in Australia, Japan or Germany to support them and make sure projects are done on time and the customers are happy.

Krannich Asia has now 4 employees, speaking 8 Languages, covering a dozen of countries. Always with the aim of staying as close as possible to the customers, despite the situation.

Most of our colleagues spend most of their free time eating out and on food. Lucky them, Singapore is probably THE place to be when you want to enjoy a good meal.

Krannich Asia is also hiring: If you are interested in becoming part of the most international team, feel free to check out the jobs page Krannich Singapore.

Prasanna and his team received a reward from SMA

Krannich Solar AG Switzerland was founded in 2013. The office is located in Spreitenbach in the middle of the Limmat valley, right on the border to the canton of Zurich. The logistics center with approx. 3,500m2 is only about 100 meters away from the office as the crow flies. From here, the multicultural team of 34 employees, which has grown continuously in recent years, energetically takes care of all customer concerns.

Cultural diversity and multilingualism are part of Switzerland's historical roots. The Swiss national languages are German, French, Italian and Romansh. Krannich Switzerland serves the whole of Switzerland, so the team faces the great challenge of representing all languages. They also have to ensure that all news and data sheets are available to our customers in several languages.

The team works very closely with its suppliers and often welcomes them to Switzerland for customer training. Due to Corona, the Swiss team has learned to be flexible and to convert the trainings into webinars.

To keep things fun at work, the team in Switzerland runs an annual sales challenge. In 2019 they had a storage system challenge and last year a project challenge. The better the achievement of the goal, the bigger the reward. Last year the team went river rafting in Graubünden with an overnight stay and meal. The year before, they won a two-day trip to the Europarc.

The Swiss team has a very open and familiar working atmosphere. Every Friday they get together at 16:00 for an after-work beer. This is where they exchange ideas and ring in the weekend. The branch is also famous for its foosball pros. The employees actively practice every day on the foosball table in the office.

However, the branch is not only committed to their employees, but also to social projects. They have been supporting Solafrica (www.solafrica.ch) for years. Solafrica works to ensure that all people in Africa have access to renewable energy and can use it for their personal, economic and social development. Since last year, they have also been a partner for WfW (Water for Water). WfW has two project works. One in Switzerland (promoting tap water in restaurants, schools and offices) and one in Africa.

Krannich Solar Netherlands is located in MS IJsselstein near Utrecht. Currently, 9 motivated employees work at the branch. The diverse team has a common goal, to promote PV expansion in the Netherlands. For them, good humor, lots of laughter and a joke or two cannot be missing from their work. This applies both to the work in the team and to the cooperation with customers and suppliers.

The fun that the team has at work was also evident at a trade fair in 2019. There, they distributed Krannich rubber ducks to visitors as fun giveaways. Even today, some of the customers remember it fondly and every now and then the team still gets stories about it from customers.

There were even some visitors who only stopped by the stand to get their hands on a rubber ducky. Who knows in how many bathrooms around the world Krannich is now present and bathing with...we are curious! 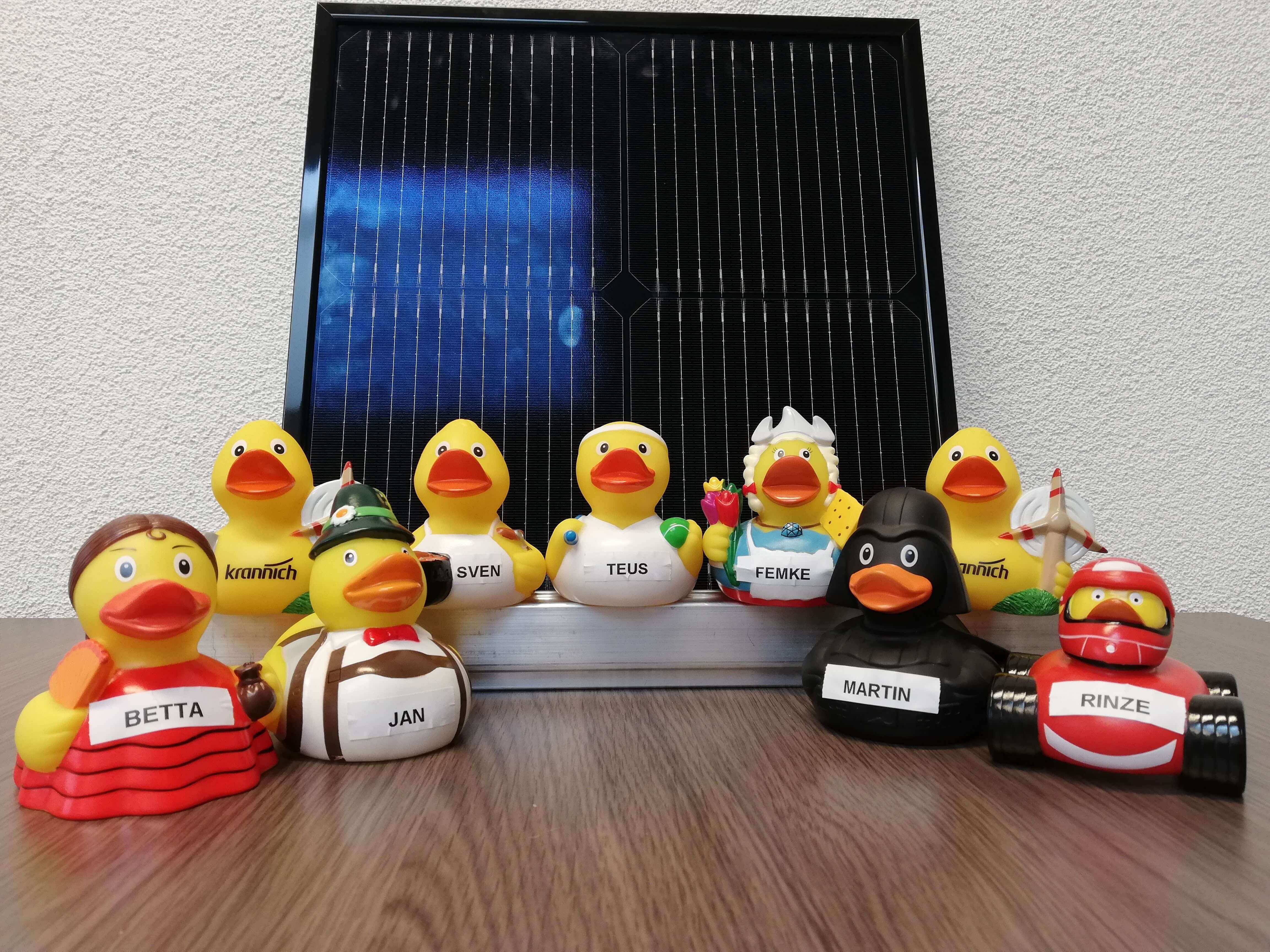 You will see what other great giveaways the team has in store for upcoming trade fairs as soon as trade fairs take place again. The Dutch team is already looking forward to it!

The international cooperation and the close exchange with our colleagues worldwide are what makes working at Krannich Solar so special. Despite sometimes thousands of kilometers of distance and different cultural backgrounds, we definitely have one thing in common: a passion for solar energy!

If you would like learn more about our branchnes, we invite you to read our article Krannich worldwide.