Silicon - How the semiconductor material controls the global economy

In our last article, we took a closer look at the value creation in PV and solar modules. We found that the semiconductor metal silicon, which is one of the most important materials for value creation in PV, is very abundant on earth. Nevertheless, the raw material has become scarce in 2021. Why is that? We take a look at the reasons.

Nothing works without chips

Whether cars, smartphones, refrigerators, washing machines or game consoles: Semiconductors are important components for products that can be found in many areas of everyday life. In modern products, they control and organize all processes. In the PV value chain, semiconductors, commonly known as chips, are also built into solar modules and the converters used in solar storage systems.

The reasons for the shortage in 2021 are complex: Corona pandemic, dependence on the Asian market, competition with other industries, disrupted supply chains. The list is long. This has led to rising prices, longer delivery times and lower availability worldwide.

The current shortage is a mix of several factors, of which it is not known exactly which is causally responsible for the gap between supply and demand. It is likely that all the reasons are intertwined.

When the Corona pandemic broke out in the spring of 2020 and sales initially declined in many areas, semiconductor production was shut down in many factories or the factories were closed down altogether due to covid cases.

However, demand quickly recovered. This was the case both for automotive manufacturers and in the consumer sector. Demand for cell phones and laptops for home office as well as for consumer electronics ranging from televisions to video game consoles rose due to the restriction of leisure activities to one’s home. Demand quickly outstripped supply.

As large as the market for chips may be, the number of production companies in the semiconductor industry is small. The production facilities, mainly located in China and Asia, could no longer keep up.

In the meantime, production capacities are running at full speed again, but global semiconductor demand exceeds supply by about one third. In addition to the current demand, there are also currently existing backlogs. This difference requires a huge expansion of capacities. And that takes time.

The current situation is expected to continue for some time and may not return to normal until 2022. Typically, the semiconductor industry takes a year, sometimes longer, to install ordered new fab equipment. Building a new production plant can take up to two years. We therefore assume that the situation described will be with us for a while yet.

This is what the silicon shortage means for the PV industry:

Competition from a wide range of industries

Various industries, such as the automotive industry, manufacturers of consumer electronics or telecommunications equipment, and the PV industry compete for the scarce raw materials that are also needed in PV production.

The main producers of mono wafers are forced to reduce their production volumes because polysilicon is currently scarce. The shortage is causing the price to rise.

Module prices have followed the trend, as such price spikes of raw materials upstream of the production chain inevitably lead to an increase in the finished product.

Module raw material prices started to increase in July 2020 and have significantly impacted module costs from the fourth quarter of 2020. The market expectation was that production costs would start to decline in the second quarter of 2021, driving module quotation prices down, but just the opposite has occurred. The supply chain is experiencing further price spikes for some materials in Q2 2021, including polysilicon, copper, and steel. The increase in raw material prices is putting additional pressure on module manufacturers, who now have to pass on some of these higher costs to customers.

At the moment, however, we can breathe a little easier. The current photovoltaic module prices have finally taken a breather after a continuous increase since the beginning of the year. Whether this will last longer or prices will rise again in the coming months is difficult to say at this point in time. At least silicon prices and thus also wafer and cell prices are currently stable, if not even subject to a slight price decline. A decisive movement in general module prices is probably not to be expected before the fourth quarter. 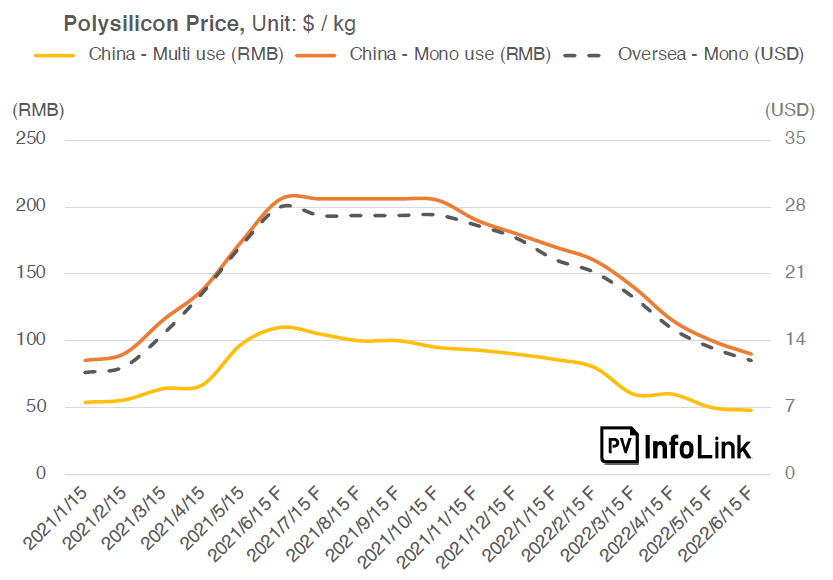 As we can see, things are currently turbulent not only in the PV industry, but in the entire global economy. No one can really influence the current situation. With our contribution, we would like to give you a few background facts that make it easier to understand the situation.

For more market insights, check out our PV Talk with Jan Brunner and the upcoming article on the Global PV Value Chain.