Significant increase in the adoption of Storage Batteries and Hybrid Inverters

Renewable energy sources are necessary to build a sustainable society and helps in reducing dependence on fossil fuels. Renewable sources of energy such as solar and wind highly depend on environmental conditions, and thus it becomes difficult to cater the peak energy demand during unsuitable environmental conditions. This challenge requires storage solutions such as batteries, which can store generated renewable energy until required.

Fluctuations, complex storage solutions and high cost are the key factors affecting the solar storage system. Presently, the solar sector can leverage technologies to follow a sustainable path. For instance, innovative battery storage will boost solar PV to become more efficient and powerful than before. Battery storage systems are evolving as one of the key solutions to effectively integrate high shares of solar in power systems across the globe.

In March 2021, the Cabinet approved USD 2453 million incentives for advanced battery storage production. This scheme is intended to build a cumulative 50 GWh of Advanced Chemistry Cell (ACC) and 5 GWh of ‘niche’ production facilities in India, thereby positively influencing the battery storage production and smoothening the shift towards sustainable sources of energy. Also, industry players across the globe are investing in ACC battery storage technologies at a commercial scale. The demand for ACC batteries is likely to accelerate at a significant rate by 2030, mainly due to the healthy growth in advanced electricity grids, electric vehicles, and rooftop solar among others.

Hybrid inverters also referred to as hybrid grid-tied inverter, are a key part of a simple, comparatively low-cost solar battery storage system, which is effectively a solar inverter combined with a battery charger in a single piece of equipment. These modern inverters use simple energy to measure electricity consumption and software which can be easily programmed to determine the most efficient use of available solar energy. Also, when a solar panel system is paired with a hybrid inverter, a separate battery inverter is not required. It stores the PV power directly into the battery, thus, reduces the need for additional conversions from AC to DC and back to AC and offers high system efficiency.

Here is the Hybrid solution from SolarEdge:

This is a single inverter for managing PV production, battery storage and backup power. For backup power, the inverter includes the hardware required for automatically supplying power to backed-up loads in the event of grid outages. 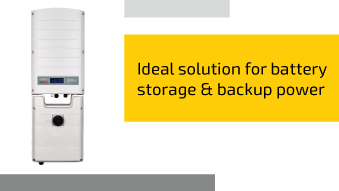 Presently, the majority of the residential plants are using a normal solar inverter, however, with technological innovation, there is a gradual shift towards hybrid solar inverter. In addition to this, cost-effectiveness associated with hybrid inverters has resulted in a significant increase in the adoption of storage batteries and hybrid inverters by the end-users. The hybrid inverters are finding increased applications in renewable energy systems where intermittency is a major issue. Also, these inverters can stabilize energy as power can be used when needed. Moreover, hybrid inverters find widespread usage in developing economies, which have less or no access to a reliable power grid.